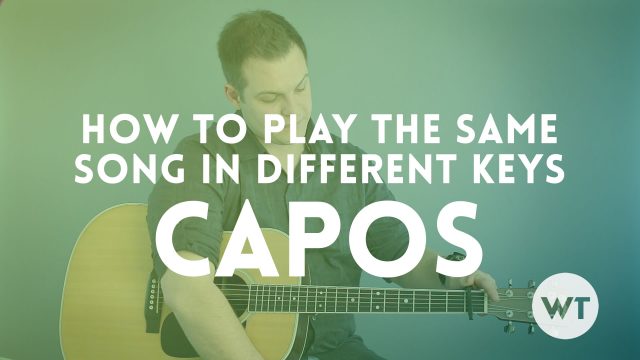 Capos: How to play the same song in different keys

One very cool trick you can use capos for is playing the same song with different key voicings. To illustrate how this works, let’s take the song Oceans (Where Feet May Fail) by Hillsong United. Oceans is in D, so naturally, you can play without a capo in the key of D. But, you can also play with a capo on the 2nd fret using key of C chords.

So far in our capo series, we’ve learned how moving the capo up the fretboard makes the song higher by one half-step per fret. So back to Oceans. If you want to play it in D and you put your capo on the 1st fret, you’ll need to actually play the song one half-step lower than D to make up for the fact that the capo makes your guitar one half-step higher. That means you’d be playing in Db, which is not a fun key to play in. Transpose down another half-step (and move the capo up another fret), and you’re in C, which is a great key to play in.

So, you can play open D, or you can play capo 2 in C – it’s the same key. Remember, as you move the capo up the fretboard, you transpose the song down – one half-step per fret.

Think this is confusing?

Why would you want to play a song in different keys?

In order to do this, you will need to transpose the song. I’m planning to cover transposing in a future video.