We all want to be able to run around on stage or walk out to the end of the catwalk like The Edge in a U2 concert. Sadly, most of us are locked into a 20 ft radius from our amp. With the Shure GLXD16, you can become the mobile stage rock star that you’ve always wanted to be.

In reality, wireless guitar units are great tools, especially in a praise and worship setting. They allow you to be mobile, which is a good thing (we are always changing positions on stage for different elements of a service). When considering one of these systems, you really need to take a couple things into consideration. Mainly price, sound quality, reliability, and TONE!!! We guitar players hate losing tone.

I had the privilege of using this system for two weeks. Those two weeks spanned the following events:

I felt like I really had a chance to put this thing through it’s paces, and I loved it. Here’s why… 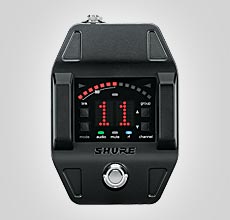 I currently use a Sennheiser  G3 system. I really like it – very reliable, great sound quality, etc. The one thing I don’t like about it is the receiver. It’s a big box with two antennae sticking out of it – the box is about the size of a Line 6 M9, if you know that piece of gear. It sits on stage next to my pedal board taking up room with multiple cables coming out of it. I assumed this was just part of using a wireless system, until I saw the Shure system.

One of the greatest features of the GLXD16 is that the receiver is actually a tuning pedal. The photo to the right is the actual receiver – it’s awesome. It’s about the same length as a normal Boss tuner, but a bit chunkier.

As a tuner it works great. It is accurate, and it locks on to pitch instantly – I could perceive no lag at all when tuning. The display is big and bright, and it was easy to see when I locked into tune. 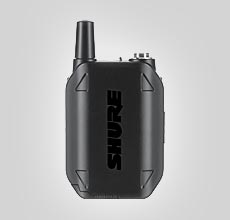 The body pack is a very sleek piece of kit – no displays or battery doors. No menu systems. Just turn it on and go. This is a good thing. My Sennheiser system has a battery door (you have to open it to access the on/off switch), a complicated menu system, and a display. Granted, the display dims, so it’s hardly noticeable to the congregation if I turn around, but it’s still there, eating battery.

These are really nit-picky complaints, but I do like the way that the Shure system is much simpler. Just an on/off switch, a battery compartment, and a battery charging slot.

The cable that comes with the unit seems to be very high quality. It has a sturdy Neutrik connector, and it screws into the transmitter so you’re not going to yank it out. The length seemed just right – I clip this part on to  my strap so that it sits about half-way up my back. The cable was long enough to reach, but didn’t have a bunch of slack hanging down. If you play a guitar where the input is on the front of the guitar, you’ll probably have to position the transmitter closer to the body of the guitar.

I spent all of about 3 minutes setting this up. I turned on the reciever and the transmitter. They found each other. I started playing. I noticed that my volume was low, so I looked through the manual and set the internal gain to 0 (unity), and everything worked just like I was plugged straight into the amp. I like to run my tuner in bypass mode, and the factory settings of this unit were set so that your signal was muted when you hit the tuning button (that’s typical). Back to the manual and 15 seconds later I was in bypass mode.

There are people who exist who feel that different brands of batteries in your effect pedals can influence your tone. I am not one of those people. I do care about great tone, though – and I won’t use something that kills my tone. I’ve used a Line 6 wireless system in the past that just sucked all the top end out of my guitar tone. I used it once.

The Shure system sounds virtually indistinguishable from my tone when plugging straight into my amp. Same with my Sennheiser system – they are both awesome. Now, any time you convert your analog signal to digital, transmit it wirelessly, and convert it back to analog, you are going to affect your tone in some way. I just couldn’t hear a difference. Maybe you can, but at the end of the day, this thing sounds great.

One other thing to note – in our room, we run four wireless microphones (all by Shure), my Sennheiser wireless guitar unit, and multiple wireless in-ear units (Sennheiser and Carvin), and there was no interference at all. The range of the Shure system also seemed quite good – I was able to walk all around our worship center and even out into the lobby with no loss in signal.

When I first received this, the battery was my number one concern. It’s a proprietary rechargeable battery. That means you can’t just throw some AA batteries in. I use my wireless unit literally all day on Sunday (I turn it on around 6:30a, and I turn it off around 3:00p). Now, I do cut it off during the messages in our services, but it stays on for a long time. What if that battery dies? Usually, on my Sennheiser unit, I might change batteries before the 3rd service. I don’t have time to charge a battery (usually we’ve got about 20-30 minutes between). To say I was concerned was an understatement. Furthermore, what if I forget to charge it and I show up on Sunday with a half-dead battery? If the thing doesn’t turn on, it’s useless to me.

I have good news. This battery is insane. Here is how I tested it:

I charged it full before Sunday, so I came into Sunday morning with a full battery. I played all day Sunday, and then purposely did not charge it again until after rehearsal the following Thursday. So, this thing went through run-through and three services on Sunday, random tinkering around during the week, and a full rehearsal before I charged it again. It never even got past 50%. Seriously impressed.

I also liked that the default display on the receiver has a large battery life indicator on it – very handy.

I would recommend, however, that you buy some spare batteries for this thing and keep them charged, just in case. You can get them for about $30. In the long run, you’re going to save lots of money on batteries.

One complaint, though – you have to have the battery in the transmitter to charge it. So, when charging, you can’t actually use the thing. I’d prefer to have some kind of a charging dock, so I can have batteries charging and ready to go while I’m using the system. Battery management just gets a bit more complicated.

I highly recommend this system. If I were buying one today, this is the one I’d buy, no question. Thanks to Shure for letting me try it out and giving me the opportunity to review it!